As a community association, our mission is to provide community amenities combined with an extensive array of programs and year-round events and activities to promote and support our members and others who come to share and use our facilities.

We are consistently building on our programs to suit the needs of residents of Thorncliffe and Greenview.

If you have a suggestion for a program or you’d like to lead a committee or group, please contact Vanessa, v.gillard@tgcacalgary.com. 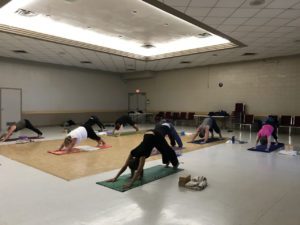 The TGCA is pleased to offer our popular Hatha Yoga class this summer!

Luann teaches an alignment-based flow using breath to link the poses together. It is important to build strength and balance, as well as the flexibility that yoga is known for.

The known physical and mental benefits of yoga practice are many. Here are just a few you can look forward to:

Bring a yoga mat and any props that you may need in your practice, and wear something comfortable.

The TGCA has sanitizing and regulations in place as part of our COVID-19 protocols. The yoga space will be sanitized before and after every class, and participants are expected to stay 3 metres apart and wear masks when not actively participating in the class. Please see the terms and conditions of TGCA Leagues and Programs here.

Hatha Yoga Summer Sessions 2021 runs in 2 4-class sessions on Tuesday evenings in the Thorncliffe Room, which is across from the main hall. As this is a summer class there is the possibility of some outdoor classes, weather permitting.

This is a TGCA program, so you’ll get a 1/3 discount as a member. Please purchase or renew your membership here.

This class is now open for drop-in. Drop in is $10 for members and $15 for non-members. Luann, the instructor, will take cash only.

If you have any questions or need assistance with your registration and payment, please contact Vanessa, v.gillard@tgcacalgary.com.

To pay online, if you are a member, please sign into your account and then return to this page. More info on signing into your account here. Click on the button that you’d like-either for members or non-members-and choose the classes you’d like. When you are happy with what’s in your cart, click checkout. This will bring you to the payment page.

Come and challenge yourself in a gentle and effective way at this low intensity, highly enjoyable class!

This class will increase your strength, you’ll learn stretches and create balance in both your body and mind while combining a fusion of general exercise, Pilates and yoga. It’s a great class for those that aren’t as mobile or are looking to get some exercise in a very low-impact environment.

The TGCA has sanitizing and regulations in place as part of our COVID-19 protocols. The class space will be sanitized before and after every class, and participants are expected to stay 3 metres apart and wear masks when not actively participating in the class. Please see the terms and conditions of TGCA Leagues and Programs here

This class takes place in the Thorncliffe Room-beside the office across from the main hall. Participants should wear comfortable clothing and appropriate shoes for a fitness activity.

This class is not open for drop-in and all participants must be registered to take part.  Pay online to register.

To pay online, if you are a member, please sign into your account and then return to this page. More info on signing into your account here. Click on the button that you’d like-either for members or non-members-and choose the classes you’d like. When you are happy with what’s in your cart, click checkout. This will bring you to the payment page. If you have a coupon code, please make sure you enter it on this page and then enter your payment information.

Become a member at the TGCA and save! Memberships are only $15 for residents and non-residents or Thorncliffe Greenview.

The TGCA would like to encourage our members and participants to register and pay for this class online, however if you’d like to make other arrangements, please contact Vanessa, v.gillard@tgcacalgary.com or call 403-274-6840.

Travis Thibeault teaches the class and is a Certified Pilates Instructor. You can find his site here: www.purepilates.ca

Please see the terms and conditions of TGCA Leagues and Programs here.

The TGCA Drop-in Pickleball Program – CANCELLED due to lack of participation. Look forward to our drop-in program coming this Fall.

Our drop-in pickleball program is a go and members can come and use the courts for $6 per person every Monday this summer.

Where? The TGCA gymnasium, 4 courts available. Pay in the office with cash, debit or credit-Visa, Mastercard. Punch passes are no longer available.

Who? All skill levels, max 4 people per court. TGCA members only, please. Memberships are now only $15! Memberships will be checked in the office upon arrival.

Why? For fun and fitness, of course!

Current provincial restrictions permit regular play among any households/cohorts. Please wear a mask and observe safe physical distancing while off the courts at all times.

Indoor shoes only in the gymnasium and we kindly request that players wear light-soled sneakers only.

The TGCA has pickleball racquets and balls available for play for our drop-in players, if needed.

Our racquetball league has been going strong for decades, and will be operating as usual this coming season, but there a few consideration and protocols put in place now.

This Fall/Winter League must operate within the AHS regulations for “mini-leagues” which mean that there will be no more than 50 players in the league.

All four courts and the change rooms will be open on league nights to league players. Appropriate sanitizing and cleaning will take place before and after the leagues time slot is up, and no other racquetball will be played during this time.

The TGCA will expect all league participants to agree to the terms and condition of the league, which can be found at the bottom of this page, as well as in the payment page when paying online.

The TGCA is strongly encouraging all league players to pay their fees online. Online registration will open later this week. If you aren’t sure how to do this, please send an email to Vanessa, v.gillard@gmail.com and she’ll be happy to help you get the fees squared away.

The leagues are on Monday and Wednesday every week from 5:00 pm until 9:00 pm (depending on how many players sign up (sometimes there is a 4:30 start time). Some players only play Mondays, some only play Wednesdays, but a lot play both nights.

The cost of each league is $110 plus $10 for snacks and prizes on each windup night (for a total of $120). This is a TGCA league, so all league participants must have a valid TGCA membership to participate.

There are three divisions on Mondays (A1 – Advanced, A2 – intermediate & B1 – beginner to intermediate). Wednesday has the same three plus and additional one for elite players called A1 Plus.

There are two leagues per year, one in January and one in Sept. Each league runs for 14 weeks, the last of which is a fun night which we call windup. There is a semi playoff between the top four players in a division, then players five to eight and so on.

Unfortunately, people cannot drop in as all schedules are set. If anyone gets hurt of drops out, there will be replacement players sought.

The leagues are open to both male and female players.

All players typically have their own equipment, but you can also rent goggles and racquets at The 56. Inquire with the bartender.

If you are new to the league, or for more information, contact league leader, Jerry Kwasnitza, kwasnitj@telus.net.

Registration is now open, and our Fall/Winter Racquetball League will begin on September 09, 2020. Please note that you need a valid TGCA membership to register for this league, and Jerry Kwasnitza, league leader, must be notified if you are new to the league in order to add you to the schedule.

Coupons for league credits from last season have been sent to last season’s players’ emails, and may be put toward the upcoming season’s fees.

Volleyball is a great way to get some exercise and get out and meet some people. Our leagues are great for the those that just want to have some fun, and all the way up to the ultra competitive player.

The TGCA has three leagues: Monday night-Intermediate, Wednesday night-Recreational, Thursday night-Competitive, and you must be 18 years of age and up to play in this adult league.

Play is at 8:30 pm and 9:45 pm in the gymnasium, and some nights, you may play both times. The seasons for this league run Fall to Spring, with a break at Christmas.

There must be at least two of the opposite sex per team, but we are allowing all-girls teams now as well. Half of the team needs to be Thorncliffe Greenview community association members. There is a volunteer requirement that each team volunteers at one bingo shift (link to bingo page).

Fees include 20 nights of volleyball, 2 – 3 weeks of playoffs, a two-day tournament, t-shirt, and a windup dinner, dance, awards trophies, jackets for first and second in your league. Fees are based on the number of teams in each league, 8 teams, 9 teams, 10 teams. Fees are determined when the number of teams has been decided.

We’re looking for teams! So, please call the number below to register yours. There’s plenty of room for all levels of skill! Registration will take place Sept. 2. If you are interested in putting a team in the league, please call Dianne at 403-295-3469

Quilting Group at the TGCA to resume Fall 2021

Nothing brings the idea of comfort to mind quite like a vibrant, inviting and cozy quilt. Why not make your own?

The quilting program is a great place to meet some like-minded, crafty folks in the area. There are several quilters that participate in this small program that have plenty of knowledge to share and stories to tell.

With the Provincial regulations for COVID-19 in mind, the program is a little bit different now.

For this particular program, the TGCA will be allowing payment for each date in the office -credit or debit only. Quilting group members are required to have an active TGCA membership and register in the program for contact tracing purposes. Registration is free, and is necessary only for tracing purposes.

Become a member here, and register by clicking in the top right corner of this program outline. If you are already a member, please follow the instructions on the My Membership page to login and renew.

Registration is free and used for contact tracing only.

This program takes place in the Thorncliffe Room on Wednesdays, 11 am – 3 pm, so there’s lots of time to spread out and get some opinions on your latest project. The room is very large, and there are 3’x 6’ tables provided to spread your materials and machine on.

The quilting work tables are spaced 2 metres apart and masks will be required, as mandated by the City of Calgary in all public spaces during the pandemic.

There is an iron and ironing board provided by the group leader, Shelley Bennet. Quilters will be required to use the provided sanitizer between uses of this shared equipment. Coffee will still be provided free of charge, but participants are required to sanitize their hands before use.

Participants can pay with VISA, MasterCard or debit at the office, which is right next to the Thorncliffe room.

See the TGCA Programs and Leagues Terms and Conditions here